A company that runs on 'structured chaos' is going viral and selling out products in minutes, from Jesus shoes to toaster-shaped bath bombs

A company that runs on ‘structured chaos’ is going viral and selling out products in minutes, from Jesus shoes to toaster-shaped bath bombs

More iconThree evenly spaced dots forming an ellipsis: “…”.Close iconTwo crossed lines that form an ‘X’. It indicates a way to close an interaction, or dismiss a notification. 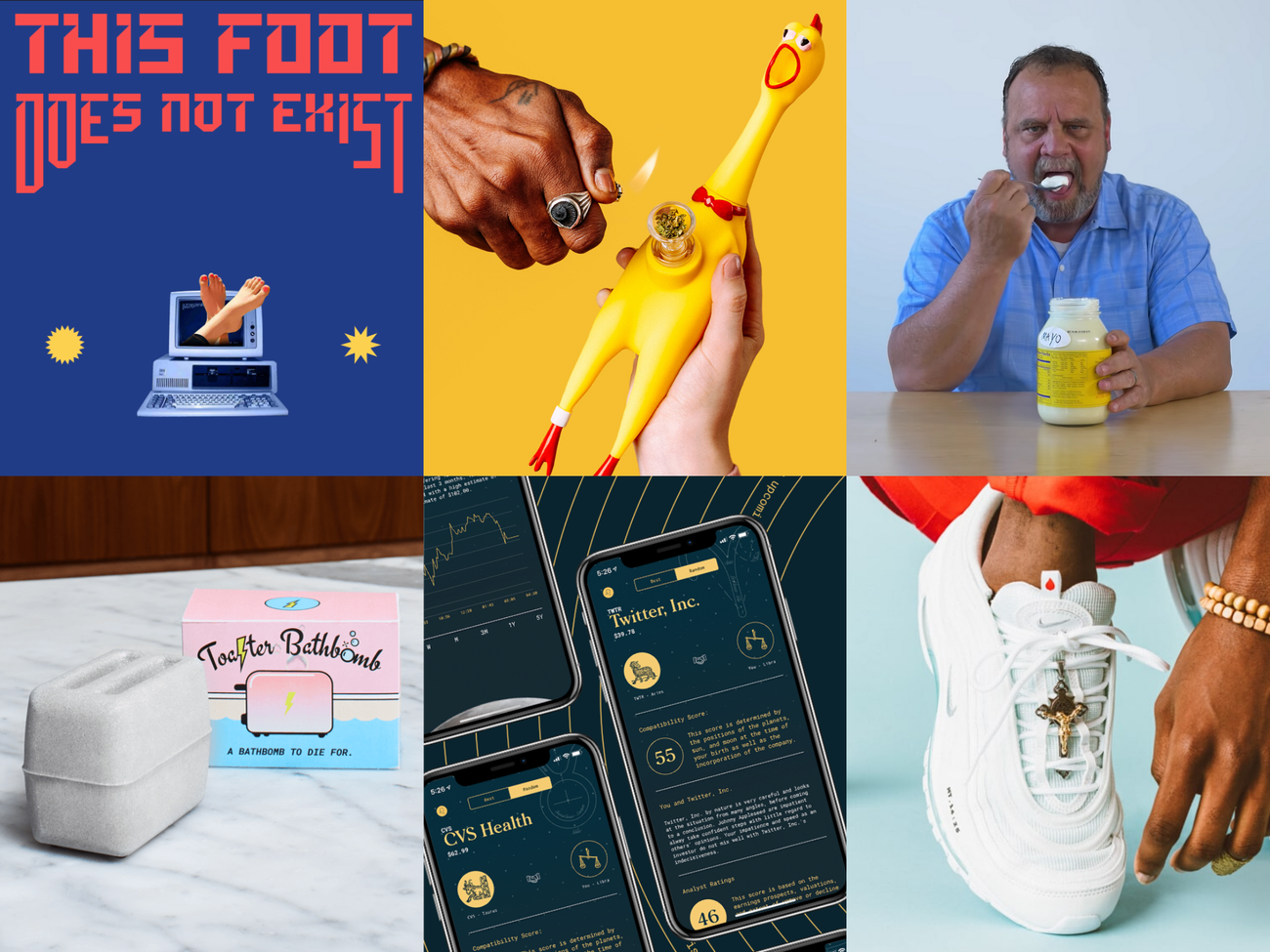 Some of the products and projects produced by MSCHF. MSCHF; Paige Leskin/Business Insider

Their only post on LinkedIn refers to themselves as a dairy company. It’s probably the best, and only, description you’ll ever get of the startup behind AI-generated feet photos, an app for making stock investments based on astrological signs, and Nike sneakers filled with Holy Water.

Even its CEO and founder isn’t sure how to characterize the company.

“A brand of what? I don’t know. Being a company kills the magic,” Gabriel Whaley recently told Business Insider. “We’re trying to do stuff that the world can’t even define.”

Whaley is the founder and CEO of MSCHF, the company behind some of the most viral stunts, stories, and products that have spread throughout the meme-laden, cynical internet community. Their products are meant to poke fun at everything and anything, because MSCHF takes pride in pushing the boundaries.

There’s no apparent thread connecting MSCHF’s slew of projects: The team has built a browser add-on that disguises your Netflix watching as a conference call, designed a squeaking rubber chicken bong for smoking weed, and created a YouTube channel solely consisting of videos of a man eating everything from a tub of mayonnaise to a photo of Pete Davidson. But for Whaley, the lack of continuity is the point: As long as the team can figure out the resources to create and launch a product, “nothing is safe.”

“Our perspective is everything is funny in a nihilistic sort of way,” Whaley said. “We’re not here to make the world a better place. We’re making light of how much everything sucks.”

Business Insider visited the headquarters of MSCHF in December, located at a nondescript address that blends in among the warehouses peppered throughout Brooklyn’s trendy Williamsburg neighborhood. The space is dingy, with cult-classic movie posters on the walls and tables covered in loose papers and partially unpacked MSCHF products. The “conference room” is a tiny loft located up a flight of stairs bearing a sole plastic chair. Whaley is quick to share that the roof leaks when it rains and the heating isn’t great, and takes pride in showing off the inside of the single-stall bathroom filled with graffiti and artwork.

Before MSCHF, Whaley was a West Point military academy dropout who was already heralding goofy viral projects on his own, such as an app that was essentially Tinder for airplane travelers. His work landed him a brief stint at BuzzFeed in 2013, but he left after a year when the department he worked in was shut down. He officially launched MSCHF in 2016.

Now, MSCHF is 10 employees strong. They’re mostly twenty-somethings — including just one woman, who was hired in 2020 — and Whaley describes them as “fans of mischief.” In the four years since founding MSCHF, Whaley hired his team along the way: one employee he found playing soccer in Chinatown, and another he hired by sliding into his DMs.

When a mass shipment of MSCHF’s latest product is delivered to the office — a dark $10 toaster bath bomb — all seven employees in the office that day crowd to the center of the warehouse to unpack them and get them ready to be shipped to customers. It’s a flurry of activity, a cloud of cardboard boxes and packing materials.

MSCHF CEO and founder Gabe Whaley, right, and creative VP Ben Rosen. MSCHF The layout of its headquarters is a stark reflection of the MSCHF’s unofficial doctrine to adhere to “structured chaos.” Daniel Greenberg, MSCHF’s head of commerce, flaunted how MSCHF shirks the traditional business model: The MSCHF team currently sets aside no budget for advertisements and marketing, and conducts no user testing of its products.

It’s also unclear whether, or how, the MSCHF team makes any money. The company used to run nontraditional ad campaigns for brands like Casper and Target, but Whaley says MSCHF stopped doing that in September 2019 to instead “go all in on our own stuff.” Since then, the company has closed two rounds of funding from investors — including an $8 million round just made public in January — totalling $11.5 million, according to PitchBook’s funding database.

However, Whaley told Business Insider he’s not worried about the sustainability MSCHF’s current way of business, and how the company can continue to scale. To the MSCHF team, the only opinion that matters is theirs, and their only goal is to get people to notice them — whether that attention is negative or not.

“If we can make people a fan of the brand and not the product, we can do whatever the f–k we want,” Greenberg, the head of commerce, told Business Insider. “We build what we want. We don’t care.”

There are times when this dissident outlook has gotten MSCHF in trouble from entities and companies that don’t share the same attitude. Slack shut down an open Slack workspace where anyone could compete in guessing the word of the day to win $1000. In its most blatant middle finger to the establishment, MSCHF created a shell restaurant called “The Blue Donkey”, where employees who pay for meals using company money or corporate perks could pretend to order “food” using an online delivery app, like Grubhub or Seamless. In actuality, those “food” orders were political donations to candidates with anti-corporate policies. Blue Donkey lasted only hours before it was shut down.

MSCHF has since committed itself to releasing a new product every two weeks: Its newest release is Clickswipe, a desktop app that swipes right on Tinder anytime you click the mouse on your computer. In line with its anti-establishment attitude, MSCHF only announces its products via text message (you can sign up for early access on its website). Despite their limited publicity, MSCHF frequently sells out their products — they only make 1,000 units — “in minutes,” Greenberg, the head of commerce, told Business Insider.

“We’re in this weird place where we’re not really thinking like a business,” Greenberg said. “We just do shit, and people buy our stuff.”